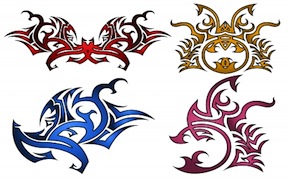 Tattoo artists are asserting their copyright claims (ABA Journal, 1 Jan 2014) – One day you’re feeling bold, or perhaps temporarily insane, and you walk into a tattoo parlor to get inked up. Congratulations, you’re the proud owner of the art now displayed on your skin and you can flaunt it however you wish. Not so fast. A growing body of case law derived from a series of high-profile lawsuits suggests that ultimately it’s the tattoo artist-not the person who bears the tattoo-who owns the rights to that tattoo. Copyright law protects original works of authorship fixed in any tangible medium of expression, including anything from paint on a canvas to sculpted clay to a piece of music. And now it’s increasingly clear that the law also applies to ink on skin. In 2012, a tattoo artist who inked mixed-martial-arts fighter Carlos Condit sued video game maker THQ Inc. for depicting Condit’s lion tattoo on a game character resembling the fighter. Also, the National Football League Players Association has warned players to seek copyright waivers from their tattoo artists to guard against lawsuits in the event images of the tattoos are used-intentionally or not-in advertisements, video games and other media. Lawyers foresee copyright waivers becoming a fixture in tattoo parlors. “I don’t doubt that in many larger tattoo parlors it will become standard that some type of document is presented to those who are going to have tattoos put on them stating that those tattoos have been created by the tattoo artist or the parlor,” says entertainment lawyer Jerry Glover of Leavens, Strand, Glover & Adler in Chicago.