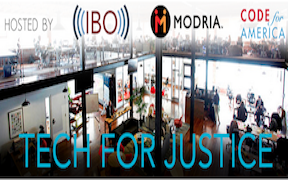 Hosted by IBO (parent of The Center), Modria, and Code for America, and in conjunction with the ODR2014 Conference,  the first ever dispute resolution hackathon was held the weekend of June 21-22nd tackling problems within 4 thematic areas, and producing prototypes that will be curated and presented to audiences at ODR2014’s UC Hastings event, where winners will be announced. The hackathon took place at Code For America‘s San Francisco Office.

The idea of a legal ‘hackathon,’ is a new one. To date, only a handful of legal hackathons have taken place in the United States, and none have specifically addressed dispute resolution.

The themes that were hacked include:

Teams produced  5-15 minute presentations on the various themes and proposed a tech solution, how it addresses the issue, and its potential for scaleability. 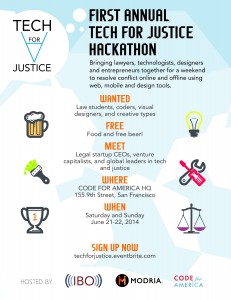