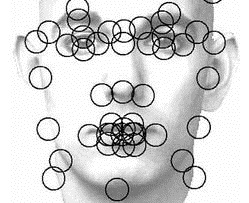 One of the many fronts in technology’s war against personal privacy comes from the refinement of facial recognition software.  Like the eye scanners in the movie “Minority Report”, these new programs are able to scan and identify people’s faces on the fly, and can be simply implemented into common security systems or personal devices.  While this tech has tons of useful and beneficial applications (such as blurring out the faces on the people captured in Google Maps’ “street view”) the privacy implications are terrifying.

What is worse is the efficiency with which these new programs can identify you.  Some of the more sophisticated of them can identify a face in profile, from many angles, even when partially obscured.  A trench coat and sunglasses will no longer be enough to keep you out of the spotlight, and in response a new movement has sprung up trying to develop ways of foiling facial recognition technology.  The website cvdazzle.com attempts to meld camouflage and fashion by developing provocative hair and makeup styles, to confuse computer (and human) onlookers.  The Japanese National Institute of Informatics disregards style entirely with its new anti-recognition goggles.  The goggles are covered in LEDs which blast infra-read light to wash out computer images but without blinding the people around them.  However, it is likely that further advances in the technology will be able to see through these disguises, leading to an arms-race of sorts between the hiders and seekers.  As this technology becomes more prevalent, it is likely that we will need a more legal solution to this surveillance problem.