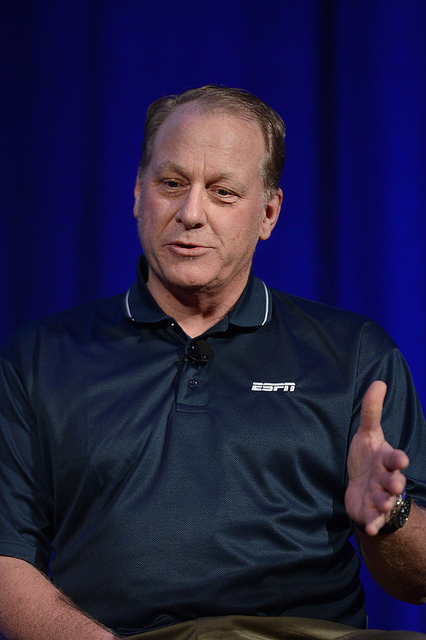 “ESPN is an inclusive company,” the network said in a statement emailed to The Washington Post. “Curt Schilling has been advised that his conduct was unacceptable and his employment with ESPN has been terminated.”

Schilling’s conduct has been called into question before by ESPN for offensive or political statements that the analyst has made. But, it was his social media post on Tuesday that was the last straw for the network. Schilling posted a meme that depicted a man wearing a wig and ripped clothing. His comments accompanying the post read, “A man is a man no matter what they call themselves,” referring to the recent bathroom laws that have been passed in several states. “I don’t care what they are, who they sleep with, men’s room was designed for the penis, women’s not so much. Now you need laws telling us differently? Pathetic.”

After receiving backlash from readers, Schilling went on to say, “You frauds out there ranting and screaming about my ‘opinions’ (even if it isn’t) and comments are screaming for ‘tolerance’ and ‘acceptance’ while you refuse to do and be either.”

Schilling is known for his outspoken comments, so this isn’t the first time that he has garnered controversy over social media. Just last month Schilling was in hot water after telling a radio station that Hillary Clinton“should be buried under a jail somewhere,” violating ESPN policy about sharing political opinions on the election.  He was suspended by ESPN in August, for making comments that compared Muslims to Nazis. This suspension was eventually extended for the rest of the baseball season.

It appears that Schilling expected that his days were numbered with ESPN. Shortly after his suspension during the baseball season, a filing with the Federal Election Commission showed that Schilling, while donating $250 to Ben Carson’s presidential campaign, had listed his employer as “ESPN (Not Sure How Much Longer)” and, under “Occupation,” he wrote, “Analyst (For Now Anyway).”