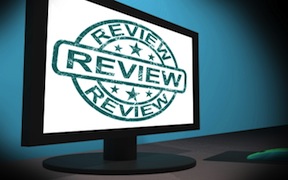 Lawyer accused of revealing TMI in response to bad Avvo review is reprimanded (ABA Journal, 21 Jan 2014) – A Chicago lawyer accused of disclosing confidential information about a client in response to his bad Avvo review has been reprimanded partly for the revelation. Employment lawyer Betty Tsamis “exceeded what was necessary to respond to [the client’s] accusations,” according to stipulated findings of fact. The Legal Profession Blog links to the joint stipulation and reprimand by the Hearing Board of the Illinois Attorney Registration and Disciplinary Commission. Tsamis also bounced a check to a client, partly because she failed to account for credit card fees charged to her client trust account, according to the stipulated facts. She made good on the check with money from her own funds. Tsamis’ Avvo revelation occurred as a result of a negative online review by an American Airlines flight attendant who hired Tsamis in an unsuccessful effort to secure unemployment benefits. The attendant had been fired for allegedly assaulting a co-worker. Tsamis asked the former client to remove his first review, posted in February 2013, and he responded that he would do so if Tsamis returned his files and the $1,500 he had paid in attorney fees. Avvo removed the post, spurring a second negative review by the former client. This time, Tsamis responded to the post and revealed confidential information about the case, according to the stipulated facts. The disciplinary complaint had alleged that Tsamis wrote this: “I dislike it very much when my clients lose, but I cannot invent positive facts for clients when they are not there. I feel badly for him, but his own actions in beating up a female co-worker are what caused the consequences he is now so upset about.” One of Tsamis’ lawyers has said he thinks the client was not identified by last name on the Avvo website when Tsamis responded to his criticism. In mitigation, Tsamis has already taken steps to improve her financial record-keeping, she has no prior disciplinary history, and she has expressed remorse for her conduct, the stipulated facts said. One of Tsamis’ lawyers, Kathryne Hayes, gave this statement to the ABA Journal: “While we believe that Ms. Tsamis’ conduct was within the [ethics rules], this matter raises an important issue for all lawyers-especially those who are active on attorney-review websites and have the opportunity to comment on client reviews posted to these types of websites.