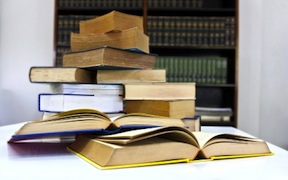 Aspen doesn’t want you to own your own casebooks (Laboratorium, 6 May 2014) – Aspen imprint is a leading publisher of law school casebooks. Over the years, it’s built a reputation for high editorial and design standards. Some of its casebooks, like Property, by the late Jesse Dukeminier et al., are perennially popular. I like to tell new Property professors that no one ever got fired for assigning Dukeminier. Unfortunately, Aspen has chosen to use Dukeminier’s Property in launching a disturbing new program: the “Connected Casebook. The official website isn’t live yet, but law professor Josh Blackman blogged about an email he received from Aspen describing the program. My account follows his. In brief, students, will be required to “buy” a Connected Casebook, which consists of two pieces. First, there is “lifetime access” to a digital version of the casebook, together with various supplementary materials. Second, there is a bound physical version of the casebook, which students can highlight and mark up freely, “but which must be returned to us at the conclusion of the class.” The obvious goal is to dry up the used book market by draining the supply of used copies. But as Josh points out, it seems unlikely that every student will return the physical book. Rather, reading between the lines, Aspen may argue that the physical book is “licensed” rather than “sold” under the reasoning of cases like Vernor v. Autodesk. The result would be that first sale (the right of the owner of a book, or a DVD, or any other copy of a copyrighted work to resell it freely) would never attach, since the students wouldn’t be “owners” of their physical copies. [Polley : this seemed ill-conceived when announced, and Aspen was back-peddling within a day; Prof James Grimmelmann @grimmelm led the forces, and routed Aspen; it was a nice Twitter feed to watch unfold.]